Home is Where the Heart Is

New Ravenna is a premier designer and manufacturer of stone and glass mosaic tiles based in Northampton County on Virginia’s Eastern Shore. The company creates handcrafted mosaics for both residential and commercial installations that are sold through nearly 200 exclusive designer showrooms across the United States and internationally.

Founded in 1992 by Eastern Shore-native Sara Baldwin, New Ravenna has grown to become the largest private-sector employer in Northampton County. The company’s new CEO began expanding the company’s marketing reach in 2016, causing demand for its luxury products to skyrocket and propelling New Ravenna towards its next stage of development. Virginia’s unique assets would allow the company to achieve its full growth potential while also preserving its deep ties to the Eastern Shore community and workforce.

From its founding, New Ravenna’s manufacturing operation enjoyed low trade costs with the Northampton County’s Foreign Trade Zone (FTZ) designation and unparalleled access to national and international markets through the Port of Virginia. These assets conferred a significant competitive advantage to a company with products shown, sold, and shipped across the world. 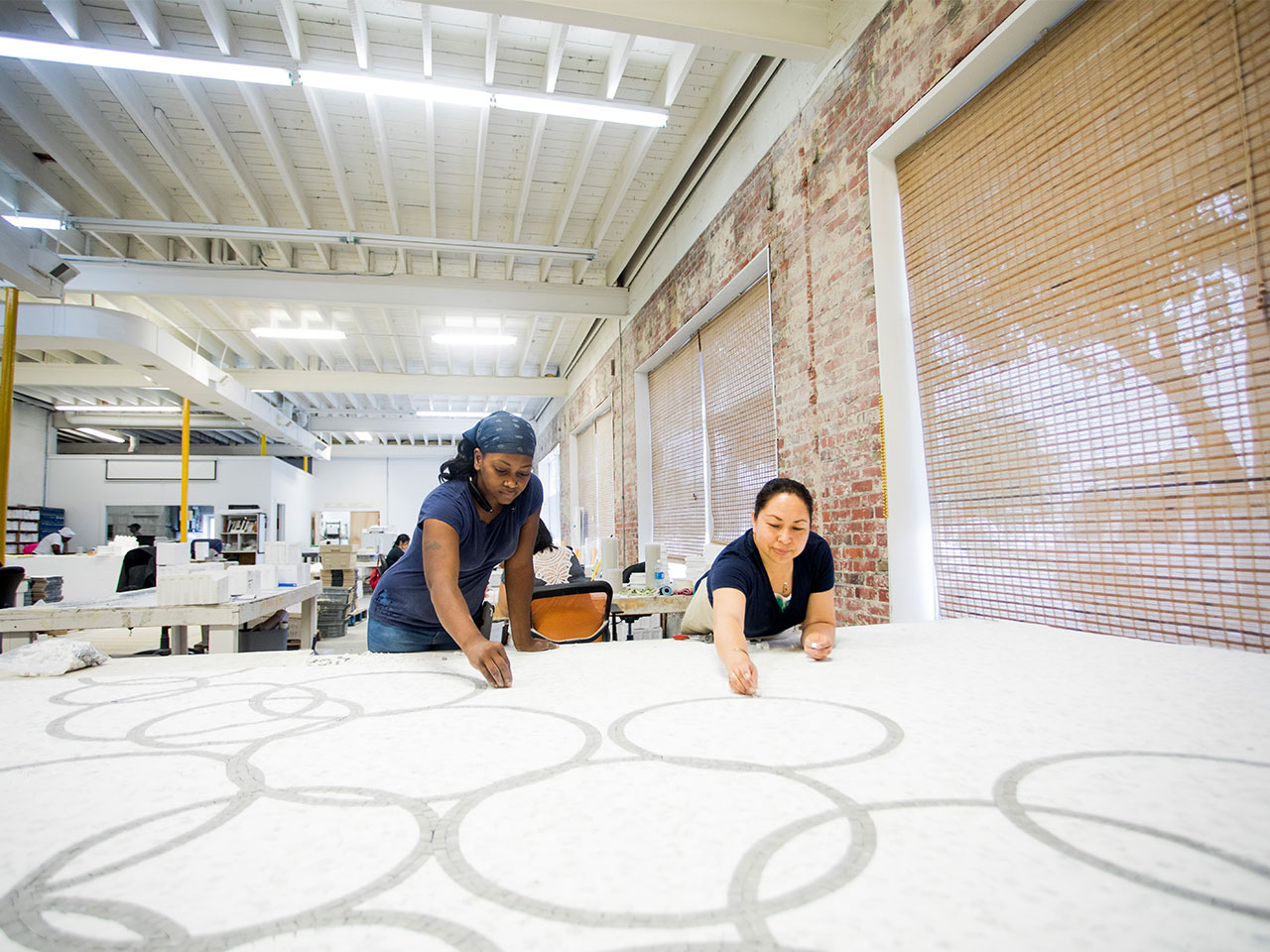 New Ravenna navigates the global marketplace through the Port of Virginia, which is the third-largest port on the East Coast by total TEUs and one of the Commonwealth’s most valuable resources for importing and exporting companies. With its deep shipping channels and lack of height restrictions, the Port is fully equipped to accommodate New Ravenna’s international growth for years to come.

The company also relies on Northampton County’s position within the Foreign Trade Zone 20 service area, which is one of the Commonwealth’s most active. FTZs allow businesses to defer paying U.S. Customs duties on imported goods held within the Zones until the goods enter the United States for domestic consumption, with no duties paid if the goods are re-exported. The designation creates a low-cost environment for New Ravenna to import raw materials such as stone and marble, as well as export finished products globally.

Virginia is a part of New Ravenna’s past, present, and future. We have a close-knit team of neighbors, friends, classmates, and family, some of whom have been with the company for over 25 years. The ancient art of mosaic-making is a highly specialized skill that's appreciated around the world, and Virginia has presented us with pivotal opportunities that are expanding both our global reach and our local workforce.

Growth on All Fronts

In an effort to execute its ambitious international growth strategy, New Ravenna made the decision to invest nearly $1 million in its manufacturing operation in Northampton County. In June 2018, Virginia Governor Ralph Northam joined the company and partners to celebrate the project in his native Eastern Shore and commended New Ravenna for creating 31 new jobs and reinvesting in the region.

The same year, New Ravenna was accepted into VEDP’s two-year Virginia Leaders in Export Trade (VALET) program, which assists companies in the Commonwealth that are seeking export growth in international markets. The VALET program will support New Ravenna’s expansion with export planning services and assistance from a team of experienced global service providers that include attorneys, web designers, bankers, translators, accountants, and freight forwarders.

Since the company’s founding nearly 30 years ago, the Eastern Shore has remained an integral part of New Ravenna’s success story. The region’s dependable labor force of over 20,000 provides the necessary talent and craftsmanship for the manufacture of world-class products, while its strategic location ensures that the sky is the limit for New Ravenna’s growth.

In the past year, New Ravenna has expanded its manufacturing capabilities, allowing its designers to add innovative and globally in-demand designs, materials, and product lines to its vast and growing portfolio. Representatives from the company have attended and displayed products at international tradeshows, opened showrooms in Japan, London, and Dublin, and have been introduced to potential suppliers, specifiers, and distributors around the world.

Aeroprobe Sets Companies Up for Speed

Aeroprobe, based in Christiansburg in the New River Valley, manufactures advanced sensors and measuring devices upon which cutting-edge systems around the world rely.

On the Front Lines: Kollmorgen Ramps Up Production

The international manufacturer of high-performance motion control products and systems makes critical components used to manufacture everything from personal protective equipment to diagnostic machines to ventilators.

The company is primed for international business expansion with its famous Duke’s mayonnaise, in large part due to access to the Commonwealth’s international sales development resources and expert services.